In The Press, Mma Dinare 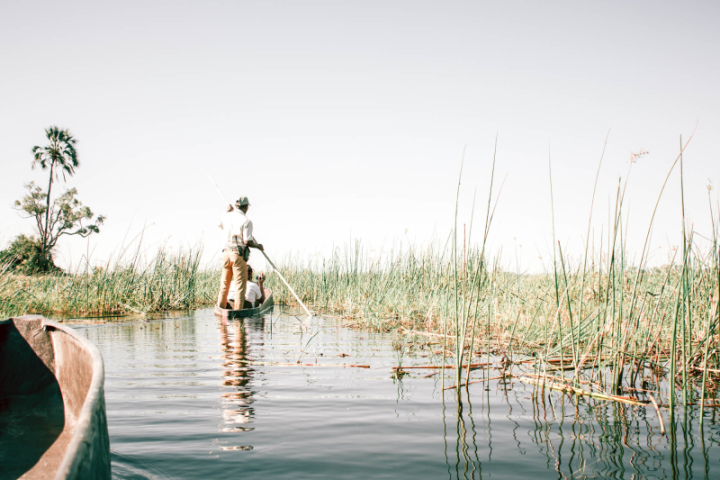 In the Press: Inside a Responsible Safari in the Okavango Delta

Find what it is like Inside a Responsible Safari in the Okavango Delta in this wonderful blog written by Melanie van Zyl on Safarious. 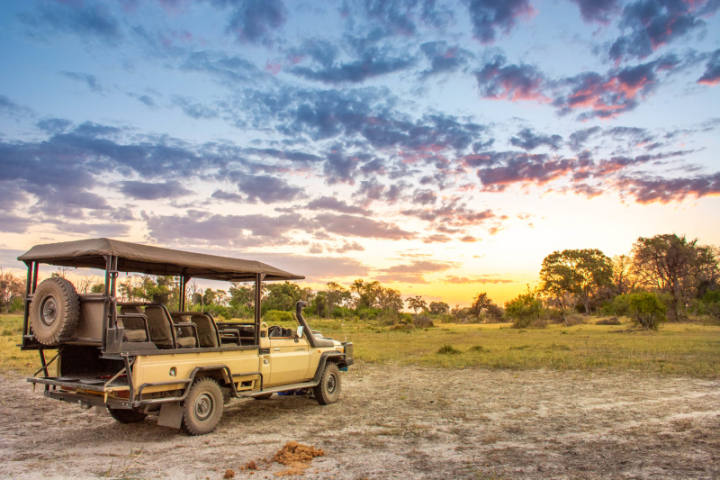 So much of what is known about Botswana is tied to tourism. The Okavango especially is revered for its exceptional beauty, and virtue as an unsullied wilderness. It sure is a perfect destination, but there’s more to travelling Botswana than enjoying her breathtaking landscapes, as I discovered on a visit to the Dinare Camps just Southeast of Moremi Game Reserve.

A short 15-minute flight from Maun and we landed smoothly on a dusty runway. The pilot, Kutlo Mokgosi (one of the youngest Motswana pilots in the air at the moment), opened his door for a woosh of fresh air that swept inside the hot cabin. The propellers finished their twisting recital, and a sudden silence announced our arrival at the Santawani Airstrip. Waiting on the edge in a Land Cruiser were our Delta decoders, field guide Chris Tebalo and expert tracker Phinix Nchungu. Our destination, the new Mma Dinare Lodge, was a 45-minute drive away. […]

Opened in May 2018, Mma Dinare means ‘Mother Buffalo’ in Setswana and is the newest addition to the Under One Botswana Sky portfolio. Proudly citizen-owned and managed (fairly unusual for the Okavango’s high-end stays) the collection also includes the iconic Delta destinations of Moremi Crossing and Pom Pom Camp. Opened in 2017, it’s neighbouring sister camp, Rra Dinare, shares the same concession. 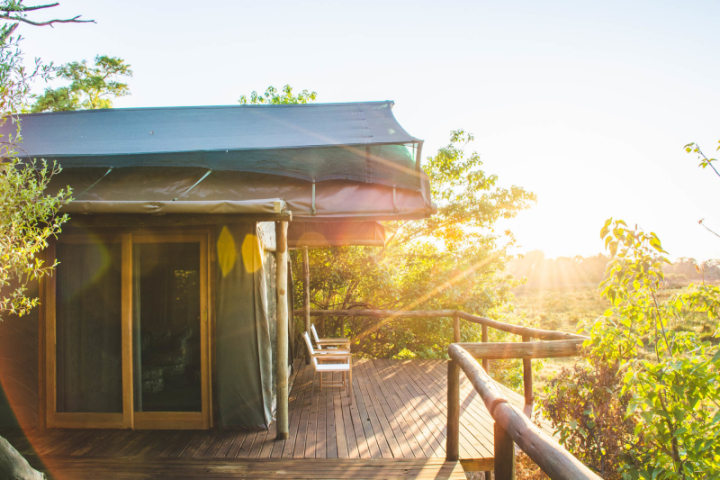 A homely lodge constructed in the traditional safari-style of canvas and thatch, Mma Dinare offers a luxurious, yet relaxed stay with just nine tents spread along the Gomoti River and its surrounding floodplains. Welcomed into camp with Setswana songs and a swig of sparkling wine, the manager Lenkamile Rams (“you can call me Rams”) showed me to my spacious suite. […] 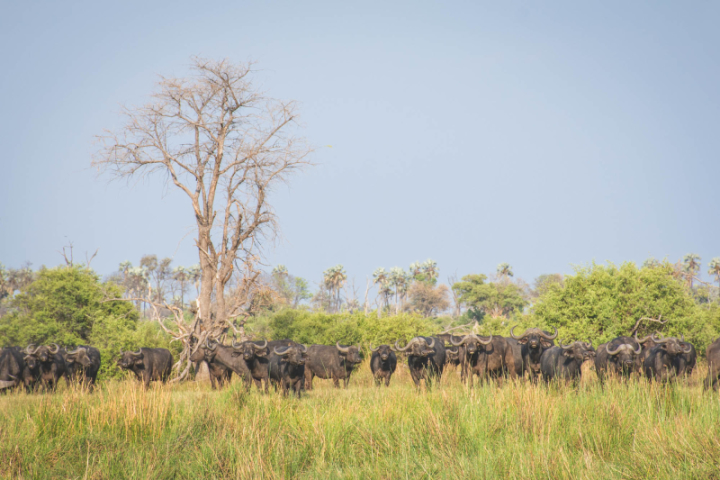 “We get buffalo here at least once a week”, said Rams when I enquired about the lodge’s name. “This is a big buffalo area”. Eager to discover who else the area was home to, I set out with Chris and Phinix on an afternoon game drive. Chris steered us first through Mopane woodland, where a breeding herd of elephant dined on the protein-rich leaves. Then we followed the course of the Gomoti River (which is named after the Water Fig tree) to its largest floodplains, where Rra Dinare lodge sits overlooking a productive panorama. […] 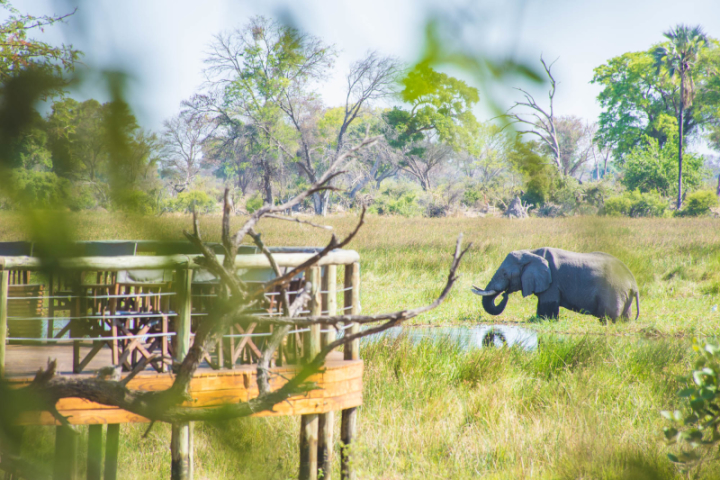 Soon after, Phinix spotted a young male lion lying in the shade beside a towering termite mound, escaping the last heat of the day. “Sometimes he even lies right below the dining deck,” Chris added as we got closer. A lone male, this lion’s extensive territory has to be regularly patrolled to maintain such prime hunting grounds. The residents of Rra Dinare lodge are lucky to have such an exciting neighbour. […] 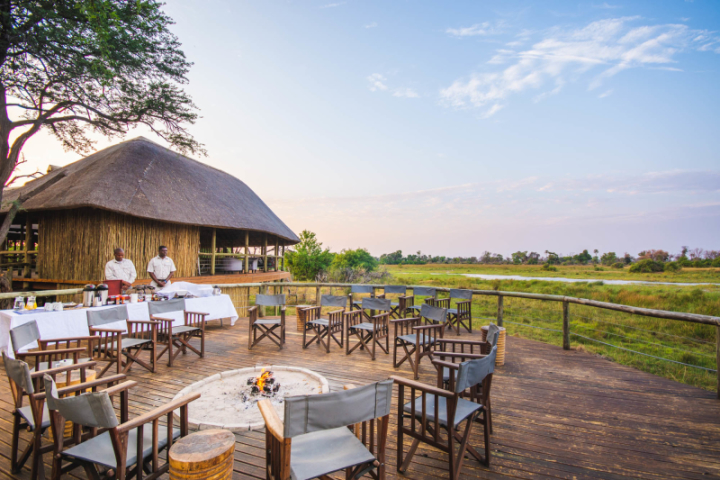 Later that evening, after a firelit dinner in the open-air deck, I could make out the squelches of a buffalo herd as they traipsed through the marsh outside the tent. Lying so close to the water, I went to bed thinking how easy it was to forget this was still the Kalahari Desert. It just so happens to host a guest named water every now and again.

Last year, Time magazine reported that “about 55 000 tourists visit Venice every day”. With the world’s most popular destinations implementing ways to combat over-tourism this unpretentious, homely camp has to be the cure to overcrowding. Combined, the two lodges here comprise just 17 rooms (plus two extra for guides) and share 67 000 acres of wilderness. One of the best things about an expedition to the Okavango is this sheer isolation, but ironically it also brought me closer to people. 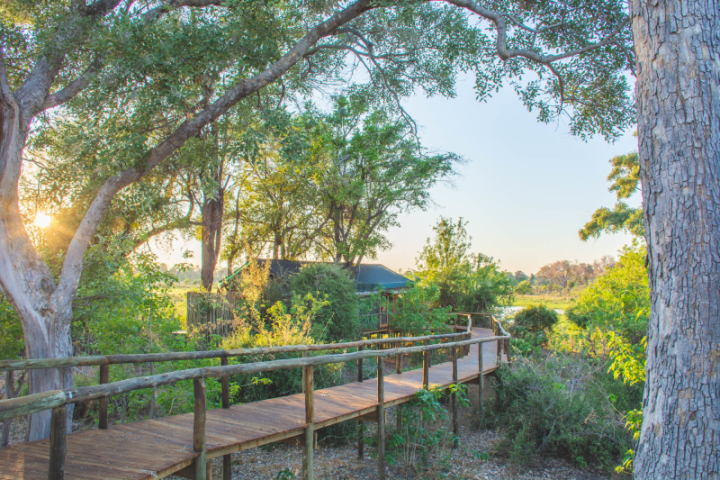 The following day, instead of an alarm clock, Keokopile Ditshupelo, hailing from the nearby village of Sankuyo, spoilt me with a gentle wake up call – “koko” – and a tray of coffee minutes before the sun rose.

For over a hundred years, the Sankuyo community have lived on this eastern edge of the Okavango Delta. The current Sankuyo village chief is Kgosi Timex Malousi, but before assuming his title, he had extensive experience as operations manager overseeing major camps and working with the likes of Ker & Downey in the Delta. Such hands-on management has come in use, but he remains humble about his background during our interview in the village after my stay. 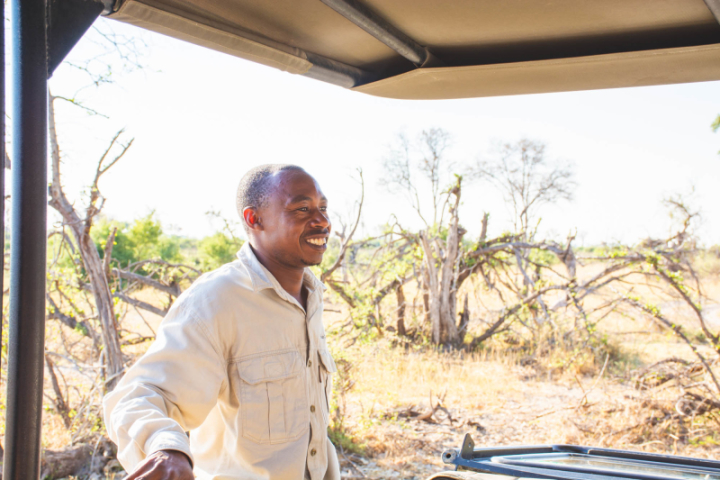 “More than 60 people from Sankuyo are employed by these camps and people here work hard,” he says. Previously a hunting area, the community now relies solely on tourism – on me and others visiting Dinare. As well as offering accommodation in the Okavango, the Dinare lodge-owners contribute financially to a community trust, which in turn is used to fund projects chosen by citizens of Sankuyo.

I notice that Sankuyo’s solar system is the same as that used at Mma Dinare. “Our trust paid for the solar here, not the government. Next, we want to expand the clinic.” Kgosi Timex Moalosi went on to explain how household water connections were also installed thanks to the trust, in the hopes of minimising human contact with dangerous animals during water collection. 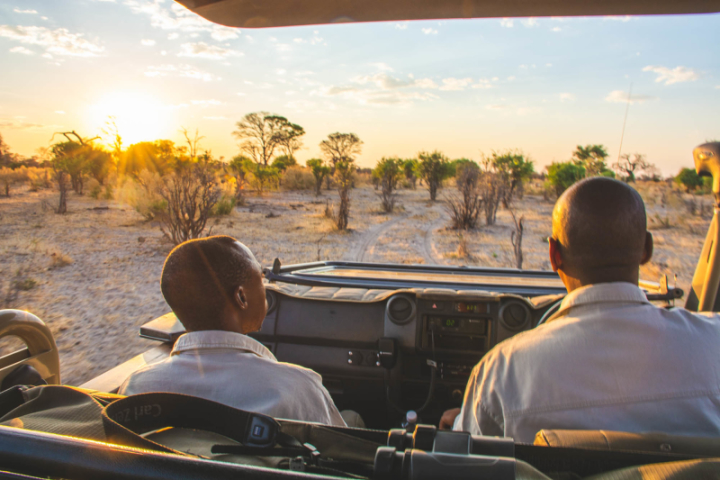 There’s been a significant shift in traveller mindsets as more and more people seek out a conscious safari. However, there’s a growing prevalence of greenwashing too, as destinations seek to join the trend. By virtue of its location, many lodges in the Okavango Delta are eco-friendly and light on the earth, but I was encouraged to see these camps using biodegradable soap (made in Maun to boot) and distributing glass bottles to guests for water use. […]

Together with the citizens of Sankuyo, Rra Dinare and Mma Dinare lodges provide a sanctuary for visitors wanting an authentic experience of Africa’s most distinguished wilds.

Maybe it’s time to introduce yourself to the people protecting paradise too. […]

Note: This is an abridged version of the original blog, which was first published on Safarious in April 2019.

Chat to us about planning and booking your responsible safari at our Okavango Delta camps.