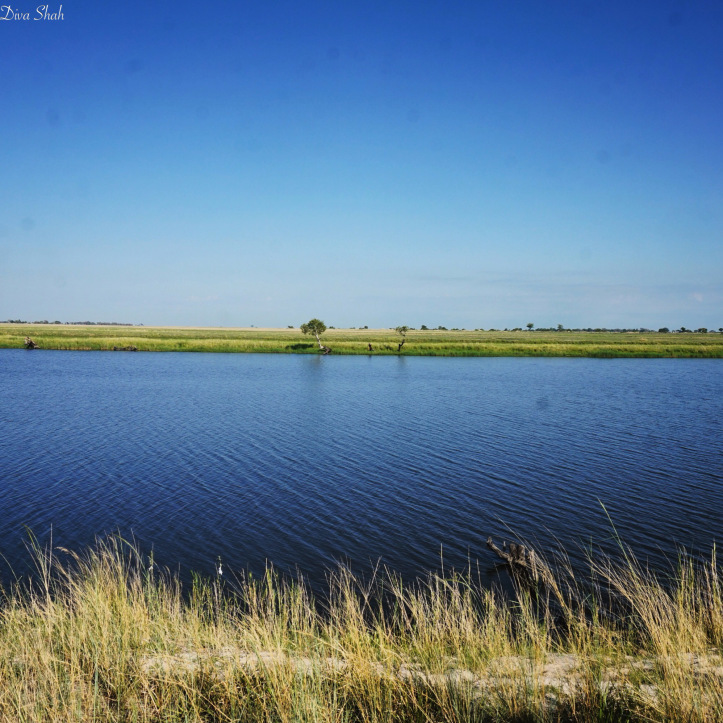 The bus had stopped at the banks of a river and everyone, but I, hopped out. I glanced out of the window just in time to see some local Zambians putting our luggage, oh and there goes my dismantled wheelchair and the packed battery crate into a small boat. Dad climbed inside and said, “Okay Jaini, we have to cross the river to get to Botswana!”

“Okay,” I calmly responded. But in my head, here I was panicking as I hyper-analyzed how despite my in-depth research, I had somehow missed out the fact that I had to cross a river to get to my final destination.

In a few minutes, I transferred onto the manual wheelchair that our Batswana tour company, Bushtrack Safaris, had so kindly provided us with. Then some local Zambian vendors, along with Dad and his friends helped lift me onto the boat. Once everyone had settled inside, we set sail to towards Botswana.

As I waited with anticipation for the next leg of our voyage, I recollected about how I ended up here…

A few months ago, Dad sent a Whatsapp message asking if we would like to go to the Victoria Falls over Christmas. Of course, as soon as I saw it, I could only reply with one word: “YES!!” Somehow, over the course of time, the plan evolved to spending two nights in Chobe, Botswana and then two nights in Livingstone, Zambia with my dad’s friend’s family.

Fast forward to a sunny December morning, four weeks ago, we were all up at 6AM completing all the last-minute packing before we headed to the airport at 9AM.

In 45 minutes, we were already at the airport (YAY! Nairobi sans traffic makes traveling by car so quick and easy). It was two days till Christmas and so the city was quiet. I had checked in everyone but myself (due to my wheelchair issues) so check-in was a breeze. The only thing that had to be sorted out was checking in my electronic wheelchair. It is always such a hassle, everywhere I travel, no matter the destination.

Checking in didn’t take too long; we headed to the Java House and grabbed a bite to eat. Soon after, we boarded the plane and at 12:30PM, we took off. 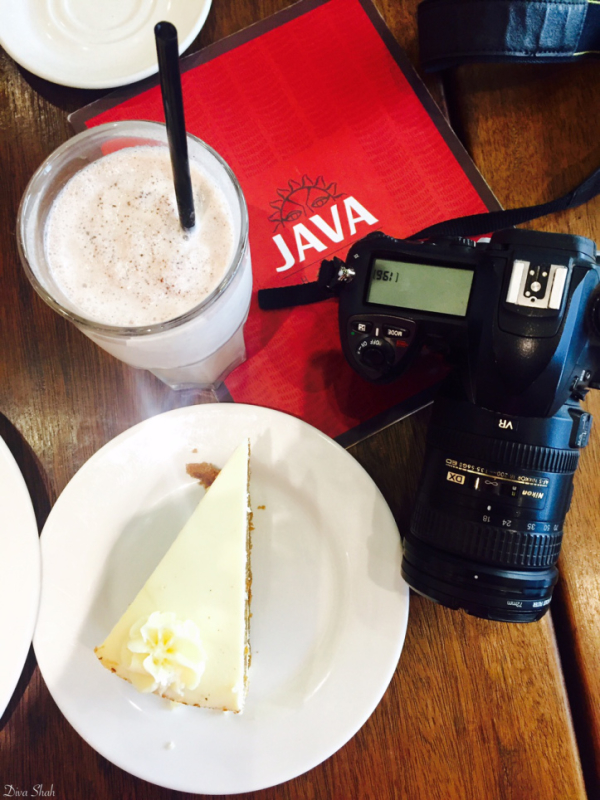 Three hours and an uneventful flight later, we landed at the Harry Mwanga Nkumbula International Airport, formerly known as the Livingstone Airport in Livingstone, Zambia at 2:30PM local time. Since we were the only flight at that time, the immigration process was a breeze. 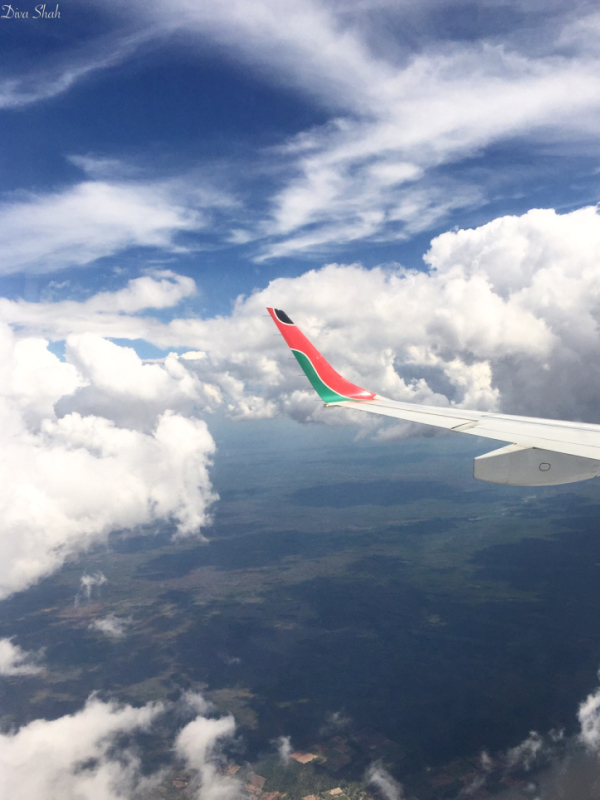 It was sweltering hot (I’m talking about 30 degrees Celsius) and humid in Livingstone. We walked out of the airport and immediately boarded an air-conditioned bus (#Blessed) provided by Bushtrack Safaris at 3:30PM and excitedly headed to Kazungula at the border of Zambia.

Once we got there, Dad and his friend went to deal with the customs, while we waited in the car. Then, everyone hopped off as we approached the mighty Zambezi River. Running for 2700 kilometers, the river flows through six African countries, starting in Zambia flowing through Angola, along the Namibian and Botswana border. It then leads to its most notable feature, the world-renown Victoria Falls, at the border between Zambia and Zimbabwe, before crossing through Mozambique to the Indian Ocean.

As we sailed along the river, I spotted a few hippos in the distance. Seeing the hippos I assumed that the river was not deep, however, the boat captain said that the 400 meters wide river was also 32 meters deep.

We crossed over to Botswana in a few minutes and there was another bus waiting for us on the riverbanks. While the others went through the immigration customs in the little town of Kazungula (Yes! The border town of Botswana is also called Kazungula), I waited in the bus. However, my dad’s friends were forced to return to Zambia as they were denied entry into Botswana.

We then drove towards the small town of Kasane, in the Chobe District to the Chobe Safari Lodge where we were staying for two nights. On the way there, Diva told me that they had to go through a foot and mouth disease test because the disease is very common in the country, where beef is a primary export. This test is essential for the Botswana officials because cows and buffalos, which they have in abundance, are the main carriers of the disease.

As we drove through Kasane, a small town of just 15,000 people, we spotted several elephant dung on the road whilst driving by several lodges. We then spotted a few elephants by the roadside. We hadn’t even reached the national park, but we had already started seeing some game.

In less than fifteen minutes, we arrived at the Chobe Safari Lodge. As soon as we stepped into the reception, we were welcomed with some refreshing fruit mocktails. Whereas Mom and Dad checked in, Diva and I being 21st-century globetrotters, quickly accessed the Wi-Fi to check in with friends and family.

The Chobe Safari Lodge is situated four kilometers (seven minutes) away from the Chobe National Park and is located literally on the Chobe River. The wooden structure of the lodge reminded me of the Kenyan lodges. Before we checked out the hotel, which was decorated with the traditional mokoros (traditional dug-out canoe used by the fishermen of the Okavango Delta) that were repurposed as both furniture, such as lounge chairs and wine racks, we headed straight to our rooms.

We had booked the Safari rooms that overlooked the Chobe River and were equipped with the luxuries of air-conditioning, TV and en-suite bath and shower facilities. With its own patio per room, two double beds filled out the room, whilst still giving me enough space to move around. The lodge also had river rooms that were simply larger and offered more privacy. In addition to that, the lodge also offered a few, Kenyan-style luxurious camping tents and the traditional thatched rondavels (African-style huts where visitors can stay in).

After lounging around, we headed for dinner at around 8PM, we went for dinner. The reception led to the lounge beside the Sedudu Bar. Just next to the lounge, was the open-air buffet-style restaurant overlooking the Chobe River. Below the restaurant was the pool deck, which then lead to a jetty that headed straight down to the river. 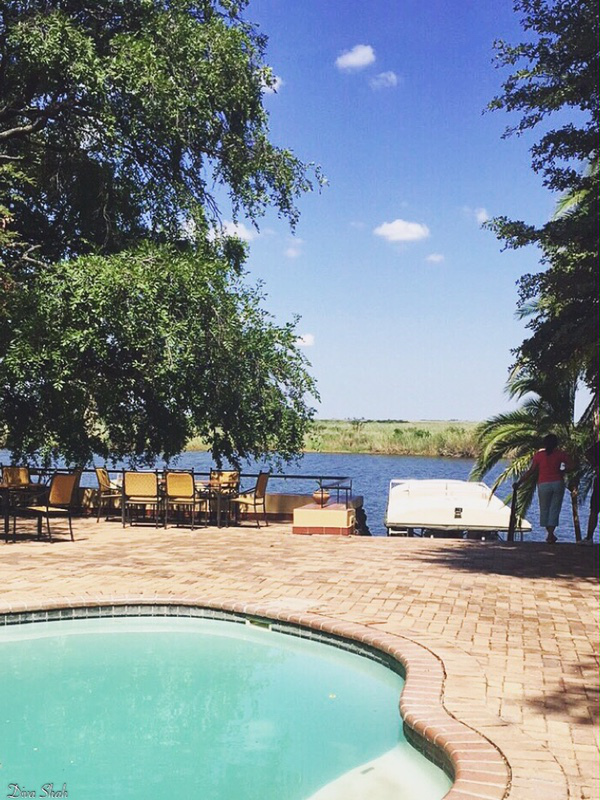 It was still humid at night so eating dinner under the open cover was lovely. However, as vegetarians we did not have many food options to choose from.

After a lackluster dining experience, we sat at the Sedudu Bar, where I ordered the Springbok shooter, composed of half crème de menthe and half Amarula, popular in South Africa. It was both tasting delicious and looked appealing. YUM!

And so that was the end of the first day of my southern African adventure.

The next day, we woke up at 5:30AM, to get to the car, an open land cruiser (provided by the lodge), by 6AM. In less than seven minutes, we had arrived at the Sedudu gate of Chobe National Park. Established in 1968, covering approximately 11,700 square kilometers, the park consists of four main areas: the Chobe Riverfront, the Ngwezumba pans, Savuti and Linyanti marsh areas. The most popular area is the riverfront, where most of the game is viewed. 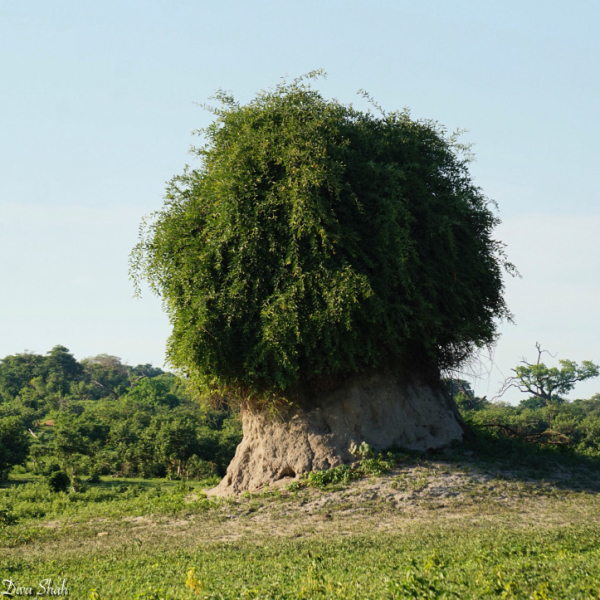 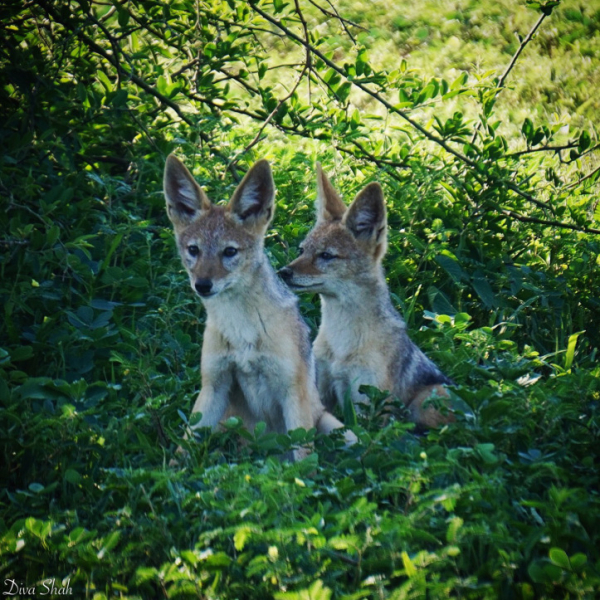 I noticed the whole park was flourishing with plenty of lush, green foliage. The guide explained that the rains had arrived, so all life had bloomed in the park. This also meant that most animals had recently given birth to their offsprings. Since the park was not fenced, most of the game had moved away from the usually crowded river area, as food was available everywhere in abundance. However, as if to answer my main worry, he said that that this is a great time to see elephants as they converge by the river. 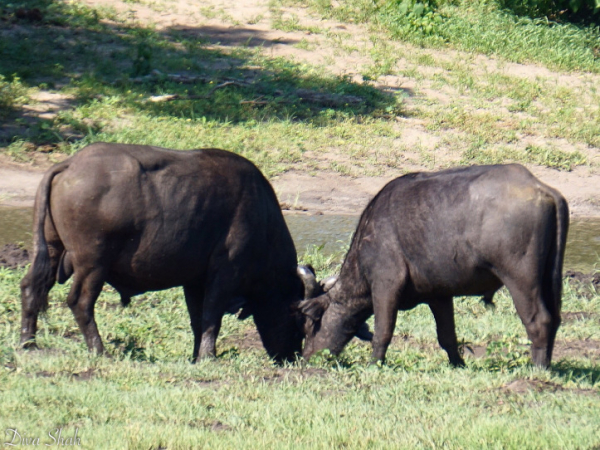 We saw several elephants just by the car on the road, and some down by the river. As we drove along, we also spotted a monitor lizard. I had never seen one that huge. We also spotted some hippos and crocodiles in the ponds by the river. 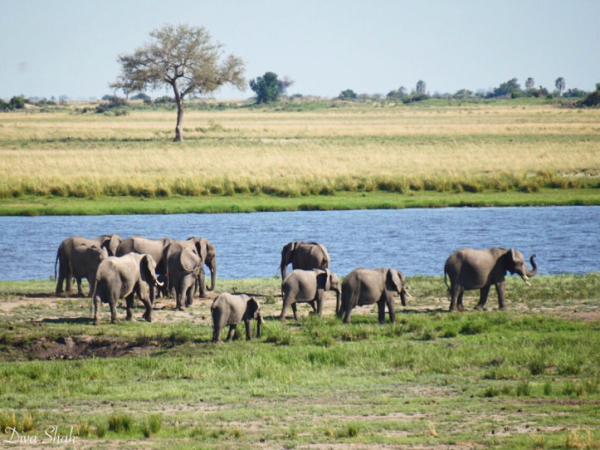 After driving by the river for two hours or so, we stopped for a rest break at a designated “Stretch Point”. The driver and guide laid out a spread of tea, coffee, and rusks on the car bonnet. I was ravenous and so glad that Mom had packed a few snacks, too.

We then were back at the lodge by 9AM, and we headed straight for breakfast. I was famished and couldn’t wait to indulge in the fresh fruit, eggs, waffles and the assortment of bread laid out in the buffet.

Stuffed to the core, we all headed back to the rooms and showered. Then emerging at 11AM, we headed over to the gift shop at the reception. After a few minutes just browsing, we walked over to the Waterfront Mall, literally just two minutes down the road. But it was so hot and humid, that those two minutes felt excruciatingly long because of the scorching heat.

The mall, that really was a tiny shopping center, had one supermarket, Choppies, and a few small shops including a forex bureau, a boutique, and a few clothing stores. We walked into Choppies to buy a few more snacks. The South African chain supermarket was crowded as it was just one of the three supermarkets in this tiny town.
After buying a few snacks, sodas and the Wellington’s Sweet Chilli Sauce (a to-die-for condiment that we have fallen in love since discovering it in South Africa, a few years ago), we headed back to the lodge walking, along the smooth, pothole-less road. There were barely any cars around Kasane.

Right outside the lodge was a Crafts Centre. We stepped inside for two reasons. One, air-conditioning. Two, to look for some Batswana souvenirs. The center sold a wide array of pots and baskets, bead, ceramic and stone jewelry and we admired some beautiful wooden carvings, however most of the items there were somewhat similar to what we get from the Kenyan Masaai markets. This led us back to the gift shop, where we picked up a fridge magnet (you can never have too many) and these beautiful bracelets.

And we headed straight to the room to relax till the next activity. 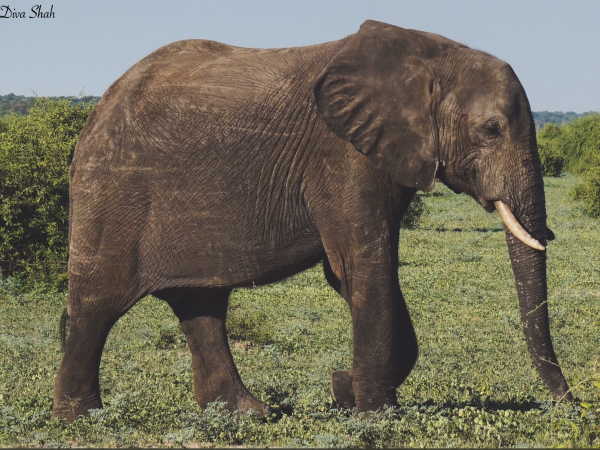