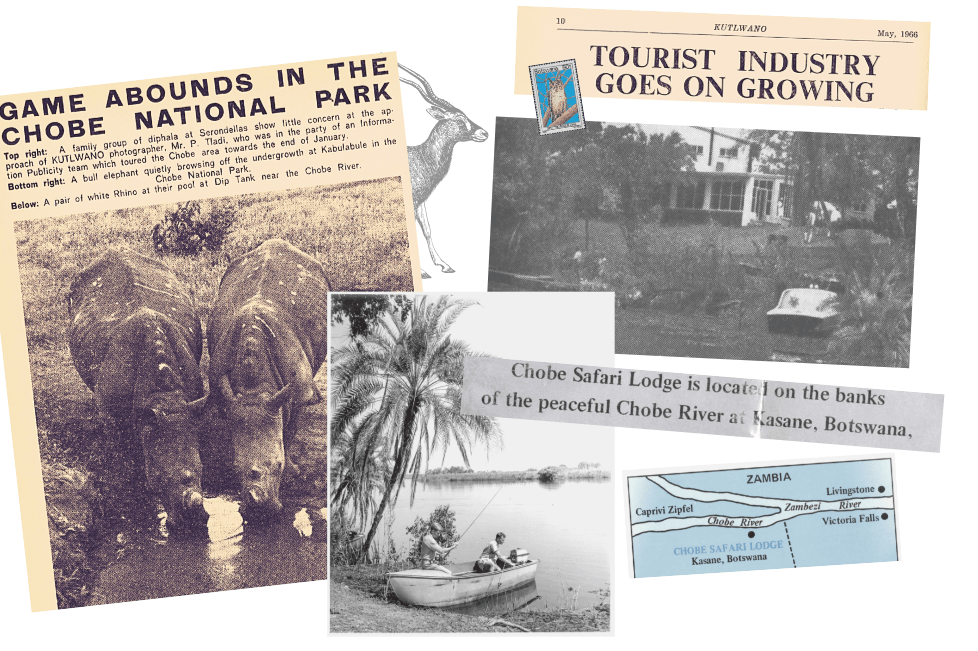 Kasane’s oldest tourism offering, Chobe Safari Lodge is a landmark establishment on the border of Botswana’s first and oldest national park. Celebrating 60 years of service this year, the iconic riverfront stay has long worn a sign at the entrance announcing a birthdate of 1959.

Following the successful establishment and prosperous tourism appeal of the Kruger National Park, the vast lands of the Chobe district were officially declared as a non-hunting zone in 1932 by the resident commissioner, Charles Rey, in then-Bechuanaland.

The 80-year old archival letters also divulge early ties to the nearby Victoria Falls Hotel in Zimbabwe. Under 100 kilometres away, suggestions recommended the two lodgings link up so that intrepid visitors might relive David Livingstone’s journey to Mosi-oa-Tunya, catch a feisty tiger fish in the mighty Chobe River and explore Botswana’s pristine wilds.
Charles Rey wrote,

“The Kruger Park pays well, so there is no reason why we should not achieve something of the sort. We have several great natural advantages … game of great variety and in large quantities, excellent fishing in the Zambesi and Chobe Rivers; there are mineral hot water springs between Kasane and Kazungula; in the fourth place, we have not got to look for tourists. They already go to the Victoria Falls Hotel, where they have not much to do beyond looking at the falls”.

However, the lasting effects of two world wars and accompanying financial pressures never saw this reality emerge until one Mr Charles Trevor and his wife, Ethnee Holmes à Court, gained interest again in 1959 – the Chobe River Hotel was born.

Fortunately, following the independence of Botswana in 1966, the Chobe Game Reserve was officially proclaimed as a National Park in 1968, thus safeguarding the future of this ‘shy game’.

“Unspoilt Botswana!” declares a later, 44-year old brochure. “The expansive Chobe National Park, teeming with free-roaming wildlife. Here is the Africa of your dreams!”. From May 1972, the hotel was known as Chobe Safari Lodge, “Botswana’s year around safari resort”.

Many things change, but mercifully, many things don’t. What began as a distant outpost in northern Botswana has transformed into a thriving tourist hub. Kasane has mushroomed in the 60 years since the town’s first hotel opened for business. Today there are over 30 accommodation options in town. However, Chobe National Park remains a wildlife haven harbouring Botswana’s densest concentration of wildlife.

Home to the unusual African Quadripoint – the only place in the world where four countries meet – and famed as the unofficial elephant capital of Botswana, Kasane and the wider Chobe region continues to lure globetrotters. Where else on earth can one see elephants snorkelling across the water and witness the wild on an afternoon river safari? Precious Puku find safety on the floodplains and the unique African Skimmers shelter on riverine island sandbanks. The handsome and endemic Chobe Bushbuck still treads between the chalets at Chobe Safari Lodge and warthogs mow across the lawns too. 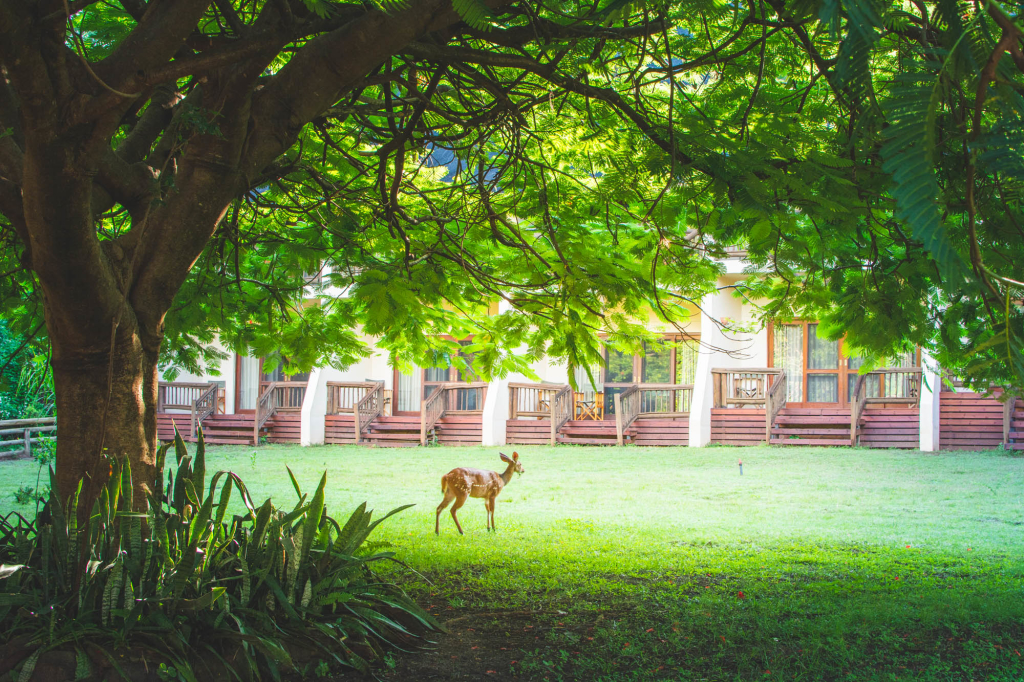 Those early ties with Victoria Falls still continue. Visitors today keep enjoying easy day trips to the magnificent World Wonder in neighbouring Zimbabwe. This regional consolidation can only strengthen more with the enterprising construction of the new Kazungula Bridge into Zambia and further fortify with the introduction of the Kavango Zambezi Transfrontier Area (KAZA) visa. 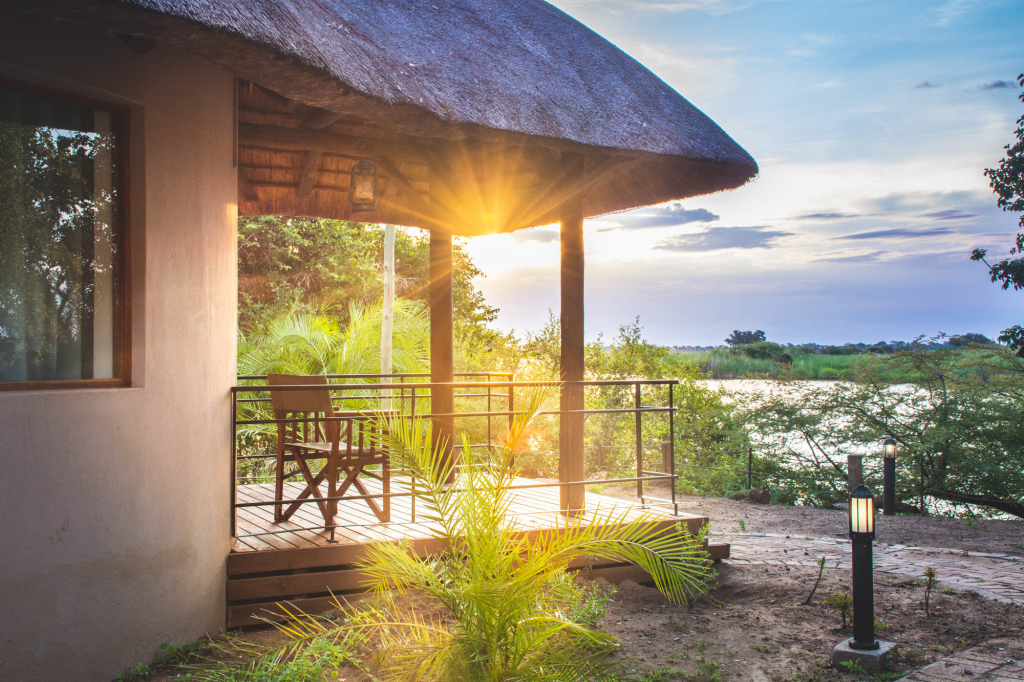 There are eight original rondavels at Chobe Safari Lodge.

Chobe Safari Lodge remains the ideal expedition base for forays into Botswana’s first national park. Founded in 1959, what started as six simple chalets now boasts 81 rooms combining convenience with quality. You can still book into one of the original 1960’s era rondavels. Each unit is modern on the inside but retains a traditional safari feel on the outside. They are also blessed with views over the enchanting Chobe River. 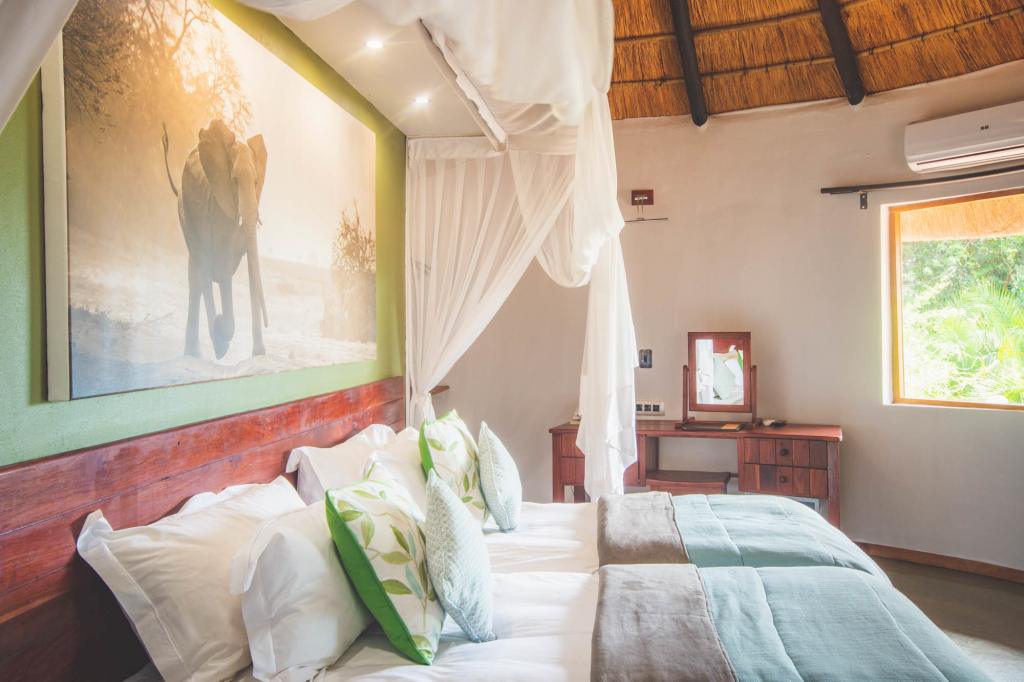 Newly revamped, the interiors of the rondavels have been modernised. 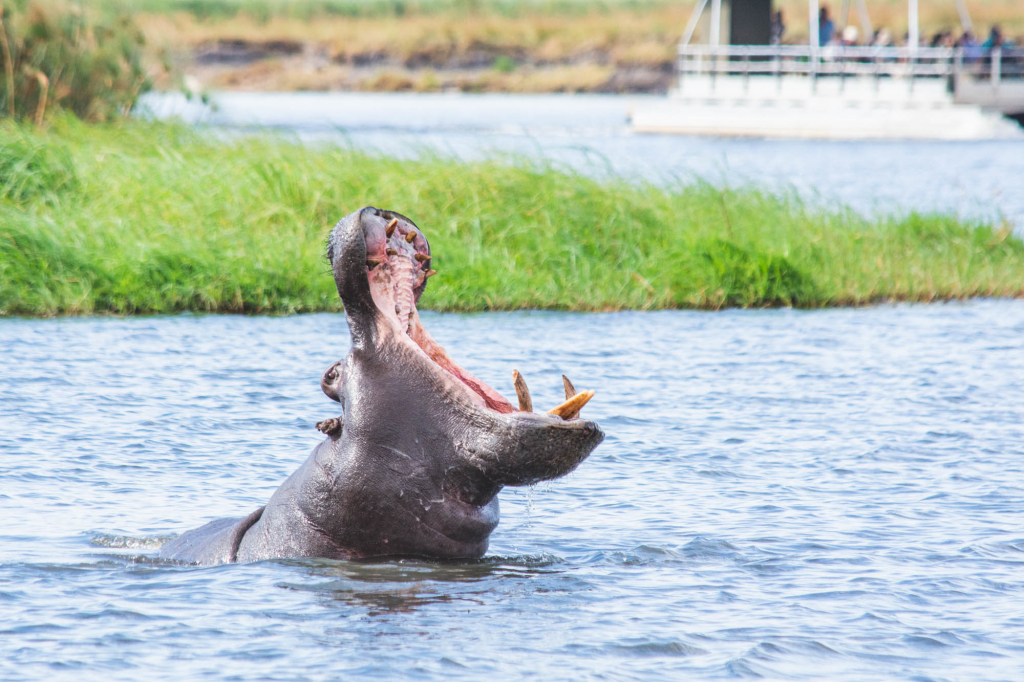 A hippo’s lifespan is typically 40–50 years. Maybe this one remembers older days on the Chobe River. 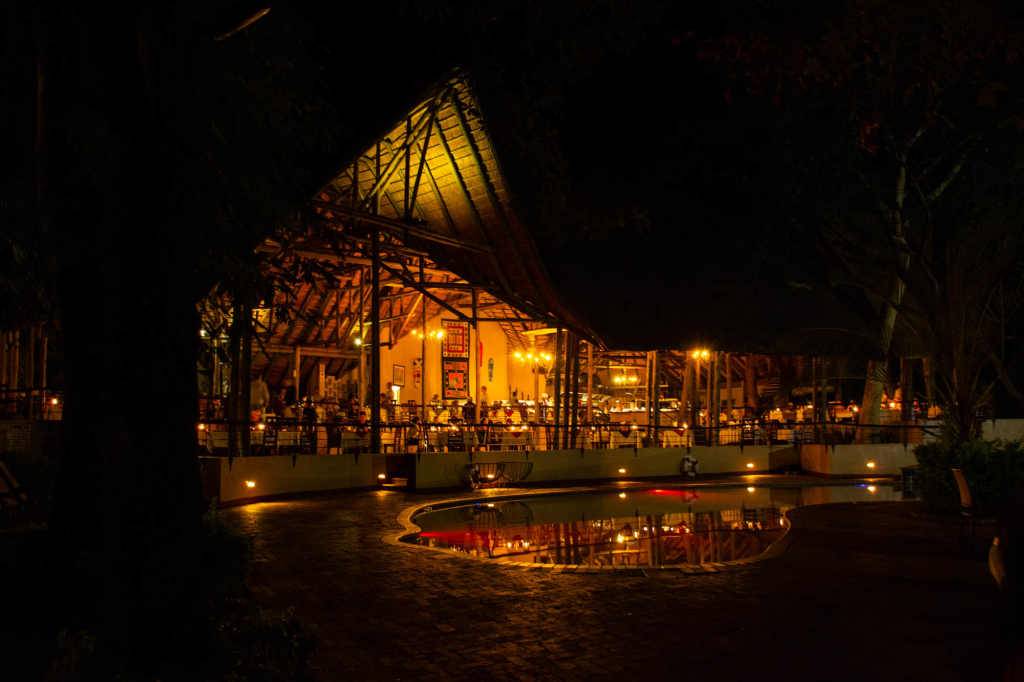 A true, trusted establishment in Kasane, Chobe Safari Lodge has helped travellers explore Chobe National Park for 60 years.  Set up to overlook the charming Chobe riverfront, this lodge is the only one in town sharing a border with Chobe National Park. The Chobe Safari Lodge has been under its current ownership since 1989 – a coincidental anniversary of 20 years. The stylish Chobe Bush Lodge has since joined the Under One Botswana Sky collection, opening doors in 2015.  Chobe Bush Lodge features more contemporary design and is a more intimate, modern stay. Riverine views are a short walk away and the quieter setting offers a more relaxed stay.

Also read: 5 Unusual Things to do in Chobe

Contact us to make the perfect reservation in Chobe.